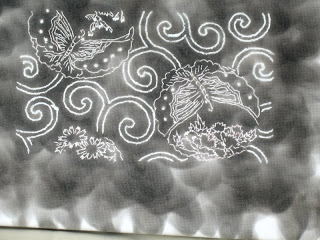 I had an idea. A complicated idea. Embroider on canvas. Then fumage over all of my work. Then rip all the thread out. Sounded interesting to me so there it is. I must say, this was a very time consuming process.
I had this idea way back when I did my first fumage piece. I had a few designs playing in around in my head until finally settling on this Japanese motif for a trial project. The canvas is really very small, only 8" x 10".
I got the design from Traditional Japanese Stencil Designs. The book reads stencils, but they don't look like any stencils I've ever seen. Perfect for these little projects though.

Now I highly doubt anyone will want to do this but I do encourage you if you are willing. 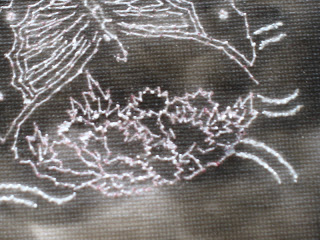 I used 2 strands of DMC floss for the scrolls. I used the stem stitch hoping that the stitch itself would be visible. It is, mildly so. I used the full 6 strands of floss for the dots on the wings and 2 strands for the dots that make up the eyes; both are French knots. I then used one strand of floss for the rest of the project. I used the open chain stitch for the main body of the butterfly moth things. I used backstitch for the rest of the project.
That was it for the stitching. It actually took quite a while. At this point I began to wonder if maybe I shouldn't burn all of the threads and then tear them out. I did work kinda hard on the embroidery. Alas, I had to press on.
I tore off all the tracing paper to expose the canvas underneath. The next part, the fumage bit, is the easiest I think. You just have to go into it without much of a plan because the flame will never behave the same way twice. Light your candle and pass the flame over the canvas. I tried to get it a little darker in some areas so that the stitches would show better.
After you've burnt all of your thread and really began to wonder if it was worth it, you have to lacquer the soot. You'll get fingerprints and smudges on the soot if you don't protect it. Make sure sure to follow the directions on the can. 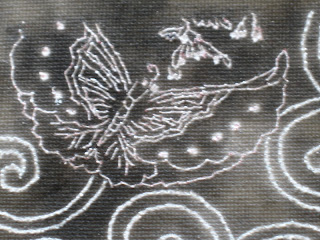 Finally for the end of the project! Time to rip out all of the thread. This is also a painstaking process. It's made worse by the fact that you're not even sure if you're going to like what you've done.
Actually, I did another step on my canvas. I painted a layer of titanium white oil paint on the back to cover any of the needle prick holes. I think it made the work look much more solid.
I hope you enjoyed my tutorial!
Posted by Pamela at 6:00 AM